You may have heard of wild posting, which is putting up a bunch of the same static posters in one urban location to draw people’s attention. But have you heard of wheat posting, flyposting or bill posting? It seems like there are many names for what is essentially the same thing.
When you look closer, there are nuances between all these terms. You can learn a lot about the campaign and the location based on what they’re called.
We’ve put together this guide on definitions of words related to wild posting to give you better insight into what all these terms mean and how you can use them. Having the right vocabulary at your disposal makes it more likely you’ll understand what you’re paying for and how to gauge the success of you are not illegal campaign.

Let’s get this out of the way first. No, wheatpasting, wild posting and flyposting are not illegal. Would we tell you to do something illegal?
We can understand why you’d ask. The medium is a form of guerilla advertising, and a lot of those tactics aren’t borderline legal. But you can relax, you’re not going to get arrested or anything if you use wheatpasting to promote a concert.
These days, many building owners function as vendors, leasing out their space to agencies like ours to cover with posters. And since we’ve been doing this for a while, we know the best, highest-trafficked areas to find space across all the major urban destinations.
Don’t try to do this yourself or with a below-board, cut-rate wild posting group. You don’t want to pay for a campaign that’s going to get torn down by the building owner or papered over immediately by another wild posting. Using a vendor that understands the landscape and can assure you won’t face vandalism charges is essential to an effective campaign.
OK, now on to those definitions. 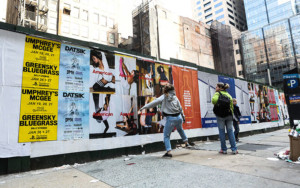 Wheatpasting is wild posting that relies on wheatpaste to attach the posters to the barricades or building. Wheatpaste is made from wheat flour and water that’s boiled to create a thick paste that adheres the paper.
One popular alternative to wheatpaste is wallpaper adhesive, which you can find at a home improvement store. It costs about the same as making wheatpaste, though some people enjoy the old school approach and feel of wheatpaste.

The posters you use with wheatpaste are referred to as wheatpaste posters. They’re lightweight and usual made with screen or digital printing. You can apply them to anything, but they stick better to some surfaces than others. Brick and wood are among the least effective surfaces.

The most effective include:

Concrete is also tough, though if there are previous wheatpaste posters stuck there, you may have an easier time posting over them

Wheat posting refers to using wheatpaste in your wild posting. You can use a bottle to squeeze wheatpaste on the backs and stick them to the wall, making sure to smooth them so they have a firm grip

on the surface. The cleaner the surface, the better the paste will stick.

Wild posters come in a variety of formats. Depending on the goal of your campaign, you may use one or more of these:

•  Single: These are generally 24 inches x 36 inches, and they include an image and copy—though not a lot of copy. Most wild posters rely mostly on pictures to tell the story. You can paste lots of these in a small area to gain attention. 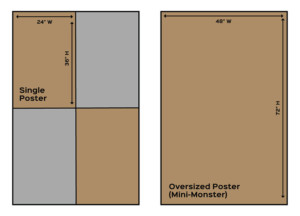 •  Monsters: These huge posters, generally about 72 square feet, have a similar sit-up-and-take-notice impact as a billboard, though they’re cheaper. 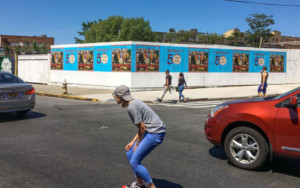 •  Mini-monster: Smaller but still attention-grabbing, these big posters measure 48 inches x 72 inches and can be grouped together on a building. 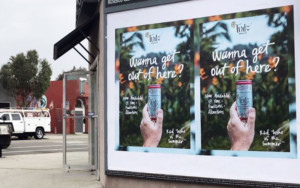 •  Tearpads: Part of the popularity of wild posting is that “slightly outside the law” vibe, and tearpads give people the opportunity to walk away with part of the campaign. They are stacks of posters that people can tear away to take home.

Flyposting is another term for wild posting often used in the UK. It means the same thing. While buildings and barricades are the most popular locations for flyposting, you can also find them in:

Bill posting means the same thing as wild posting. Use them interchangeably, but know that fewer people use this term than wild posting. 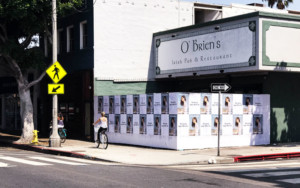 Domination
Dominations are wild posting campaigns dedicated to a single client where you essentially “own the street.” It’s a long space, 50 feet or so, where people see only your advertising. You may have 40 or more posters in the area. The more creative and imaginative the pictures and the simpler the copy, the more attention you will receive.

Permitted
Permitted posting, as we alluded to above, occurs in an area where the landlord has given their permission for your campaign to run. You have paid for the privilege. You might get space on construction barricades or an actual building.
We love campaigns that combine practicality with imagination. You want your posters in the space where you will reach the right audience, and you also want to deploy them in creative combinations. Some ideas:

Non-Permitted
It then follows that non-permitted is wild posting you do not have a permit for. You can put these anywhere. But you might get in trouble for them. 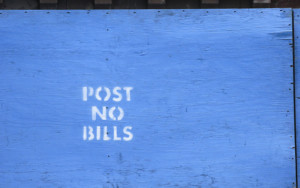 Sometimes landlords insist on no wild posting. They will put “Post No Bills” notices on their property to alert people not to cover them with posters—or face the consequences. In the UK, you w

ill see this as “No

Like so many other types of advertising, wild posting relies on great imagination to deliver the best results. You can try new things, experiment and see what works. Whether you want to call it wild posting, bill posting or flyposting—we can assist you with all three! Get in touch today to discuss your options.