The Ultimate Guide to Wild Posting

The Ultimate Guide to Wild Posting

You may have heard of wild posting. But do you really know what this form of advertising consists of? It includes pasting advertisements on buildings, bulletin boards, construction site plywood and anywhere else beyond the ordinary out-of-home advertising venues like billboards.

The effect is to draw greater attention than a single poster in a single location might. When your posters are deployed across the city in strategically placed groups, they make a greater impact.

There are a lot of misconceptions about wild posting. Many people think it’s illegal. Others don’t consider it a real form of advertising. And some think it requires no strategy, just a helter-skelter, random-placement approach.

We’re here to tell you none of that is true. Read on to learn all the essential information you need to know about wild posting and why it can offer an exceptional return on investment (ROI). 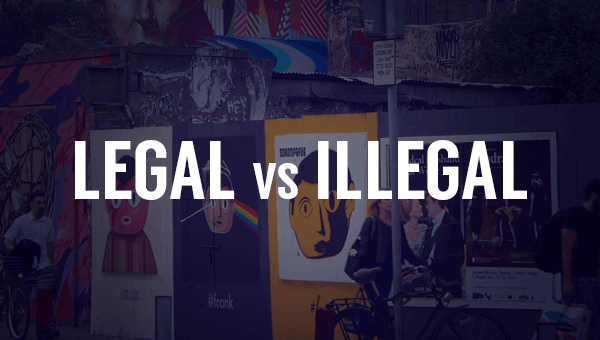 Let’s begin with the big question: Is it illegal to engage in wild posting? In a word, no. Trust us, no legitimate agency would suggest you do something illegal to advertise, no matter how awesome the ROI. If we think a client would get in trouble by posting in a certain location, we’ll advise against it.

That said, you should understand there are really two types of wild posting, according to DASH TWO Outdoor Strategy Manager Rodolfo Queiroz.

“There are permitted postings, which are okayed by the landlord and prearranged for the vendor to occupy for, say, a year. They’ve said they will run the campaigns with no problem—they won’t get in trouble with the law or risk being taken down,” Queiroz says.

The other type of campaign is unpermitted, where landlords have not given prior permission for postings. “Unpermitted campaigns are dog-eat-dog,” he says. “You may be given a cease and desist [a cautionary notice saying to stop advertising]. You have to be okay with getting the posters taken down.”

What’s the real difference between the two? Money, for one thing. Permit space will, as you’d expect, be more expensive. Unpermitted will cost less. A good agency allows the client to make the call on whether to run a permitted or unpermitted campaign, because ultimately the advertiser should be comfortable with where its message appears.

Location matters, too, with wild posting, and sometimes finding the right location necessitates using an unpermitted campaign. In the Arts District of Los Angeles, for example, permitted space is limited—but since it’s a highly desirable place to advertise, clients may want to risk the cease-and-desist. (It’s very uncommon for this to be sent, Queiroz says.)

How Is Wild Posting Measured?

Unlike most other forms of outdoor advertising, wild posting is not audited by the Outdoor Advertising Association of America. There’s no surefire way to measure the number of impressions a campaign generates, though you can look at the market’s daily effective circulation.

However, Queiroz says most clients find it has a high ROI. It’s noticeable, and it results in tangible action taken by people who see the posters, such as purchases.

How Many Locations Are Used in a Campaign?

Queiroz says the typical campaign comprises 20 locations, but one that requires greater reach and frequency may include up to 30 locations.

How Many Posters Are Put Up?

Again, this can vary depending on your campaign, but 250 minimum are printed for each campaign, and at least two posters are placed in each location, though some may have a lot more than that.

How Is Wild Posting Targeted?

Queiroz characterizes wild posting as more of an art than an exact science. A lot of targeting depends on the availability of location and space.

“While everyone would want to ideally be in West Hollywood or Silver Lake, Venice, Santa Monica, it’s tough to please every request,” he says. “If vendors did so, there would be a shortage of inventory. Spreading it out is a way to try to have a little in each area while still having a presence in other areas.”

Production companies love taking over an entire barricade to advertise a new movie. Fashion and music are the other categories most associated with wild posting, and for good reason. The visual medium makes it a perfect vehicle for artistic campaigns. Plus, the underground, daring nature of wild posting (passersby don’t know you got the space legally through a vendor) makes it seem a lot cooler than, say, a traditional ad in a magazine.

Advertising should mesh with the vibe of the area you target. While you want your posters to stand out, you don’t want to alienate the audience.

“It’s kind of a natural and blends in with the urban landscape,” says Queiroz. He notes copy should be kept to a minimum, with the focus on the artwork.

What Are the Advantages of Wild Posting? 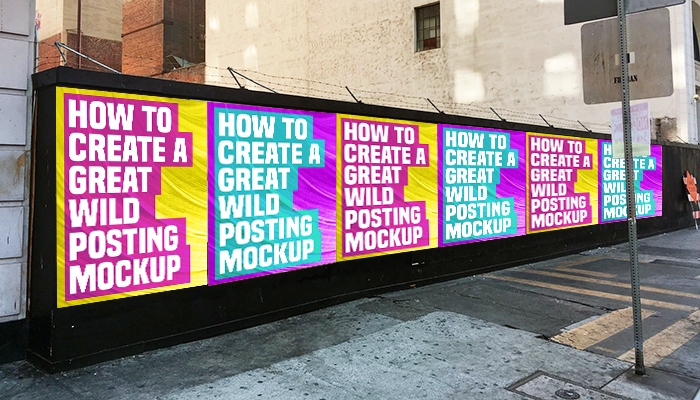 Just a few of the benefits of employing wild posting include:

How Long Do the Posters Stay Up?

A guerilla campaign will remain in place until the landlord decides to remove the posters. Permitted campaigns will be pasted over when the next advertiser’s campaign begins. These wheat paste posters can be applied over and over on top of each other.

Who Posts the Posters?

Vendors handle the logistics of the campaign. They have installers to put up the posters. These people apply glue to the backs of the posters, then use a broom to smooth them out.

How Much Does Wild Posting Cost?

As we noted, it’s less expensive than many other forms of advertising. A campaign in LA in 20 locations could cost about half what a mid-range billboard costs—or about a quarter of what a billboard in a prime location like Sunset Boulevard costs.

How Long Does a Campaign Last?

Wild posting generally has a two-week campaign window. The postings get “stale” after that time, and may become fade through exposure to weather and sunlight. The messages get less legible the longer you leave them up.

Is Wild Posting for Your Company?

That’s a question you will need to discuss with us to decide for sure. Contact us to learn more about wild posting opportunities and what would work best for your needs.